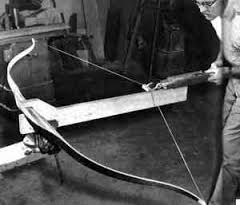 How Is A Recurve Bow Made? Lets Find Out!

In modern traditional archery, the recurve bow is one of the most popular designs, and is recognizable by its iconic shape, which bends back towards the archer at the ends. A recurve is made up of three main parts: the riser, which forms the central part of the bow where the grip and rest are found, and the two limbs where the string is attached. Technically, a recurve bow is defined by the meeting of the string and the limbs on a point below the string knocks, or the small notches that hold the string in place. While this breaks down the parts, it does not answer a fundamental question: how is a recurve bow made?

First, the riser, the central part that the limbs will later be attached to, is cut using a bandsaw or similar tool from a template or outline. Usually the riser is made from wood, but materials such as carbon fiber, and aluminum or magnesium alloy are also common. The grip is formed from the shape of the riser itself and is sometimes wrapped with leather or similar materials to make it easier to hold. Holes are drilled for an arrow rest to be mounted, for the attachment of the upper and lower limbs, as well as for a stabilizer and sight, should the archer choose to use them.

The limbs themselves form the majority of the bow’s length, but are generally very lightweight and detachable from the riser to provide easy storage. The limbs are constructed from several layers of carbon fiber and/or wood, glued around a core of wood or carbon foam. Once the layers are attached, the limbs are covered with masking tape to prevent damage and placed into a curved press called a bow form, which uses heat and pressure to force the flexible laminates into the recurve shape as the glue sets. String knocks are then cut into the tops of the limbs, as well as grooves below the knocks where the string will rest. Some bow limbs will have fiberglass or horn tips for reinforcement. The holes are then drilled so that the limbs can be attached to the riser.

The last step of recurve bow construction is to attach the string. In the past bowstrings were made from natural fibers such as hemp, linen, sinew, and rawhide. These days the strings are almost always made out of a combination of synthetic polymers, such as Kevlar, Vectran, or Dyneema fibers. Once all the parts have been assembled the bow is ready to be shot.

Bow making has a long and rich history, and the methods of how a recurve bow is made today is only one piece of tradition stretching far back into the past. While it is less commonly used for hunting, recurves are the most popular of traditional bows, and are used in the Olympics. No matter what type of bow you use, however, the important thing is that you get out there and practice!