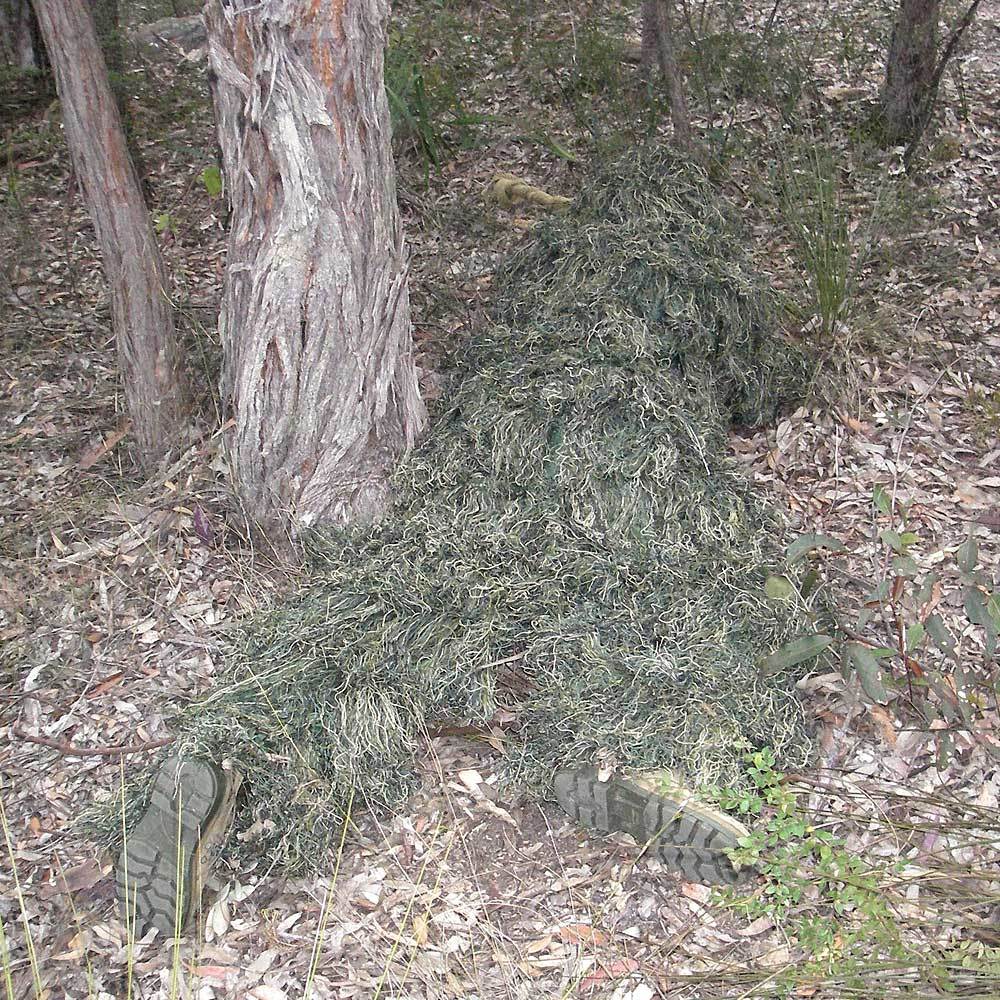 Why is a Ghillie camo suit so much better than just the standard issue AUSCAM uniform for concealment and camouglage?

The uniform that the Australian Military current used is called the DPCU, which stands for Disruptive Pattern Camouflage Uniform. It is a general purpose uniform designed to disrupt the visibility of a soldier from 300 metres and beyond. It is obviously not designed to be the perfect blending colors for all terrain including urban, bush and deserts. The Ghillie (or in Australian military its more commonly known as a Yowie suit although that is changing over time) is designed to go beyond this and actually hide the soldier.

The Gillie Suit has the ability to conceal the soldier which is not only far more effective at 300 metres but is very effective at close range distances. For instance, 50-100 metres and in some cases -point blank. It achieves this in several ways. Firstly the colors are designed specifically for the Australian bush and therefore are far more effective given that no consideration has to be made for urban or desert warfare. The colors are based on the woodlands American design but are slightly lighter to best cope with the Australian bush, which are muted shades due to the drier climate.

Ghillie Suit Best Quality: The 5 S's of Cam and Concealment

In military speak the cam and concealment come under the 5 S’s...

Have the cam and concealment lesson this consideration comes under the title of surroundings?

Shape refers to the soldier being spotted due to the symmetry of his body egg straight arms, legs, head and also the symmetry or shape of the troop movement being the soldiers in a group or formation. Ghillie suits work towards disguising this by disrupting the straight lines of a human body and disrupting the pattern of soldiers in formation together so they more closely resemble vegetation.

Another important consideration is Shine, obviously the DPCU has some success in alleviating this concern but the 3 dimensional nature of the suit is far more effective and pretty much eliminates this concern completely. Wearing the Ghillie/Yowie suit answers this concern comprehensively.

Shadow is another concern especially when trying to be concealed from air drones. Although the soldier’s body is almost impossible for the drones to spot, the shadow can be very obvious at certain times of the day. The Ghillie/Yowie suit again assists in this regard by breaking up the obvious shadow of a man much like it distorts the shape, making the shadows more closely resemble the natural vegetation.

These points are also very similar to the issue of silhouette as again it distorts the obvious outline of a soldier silhouetted against the backdrop of distant light sources. 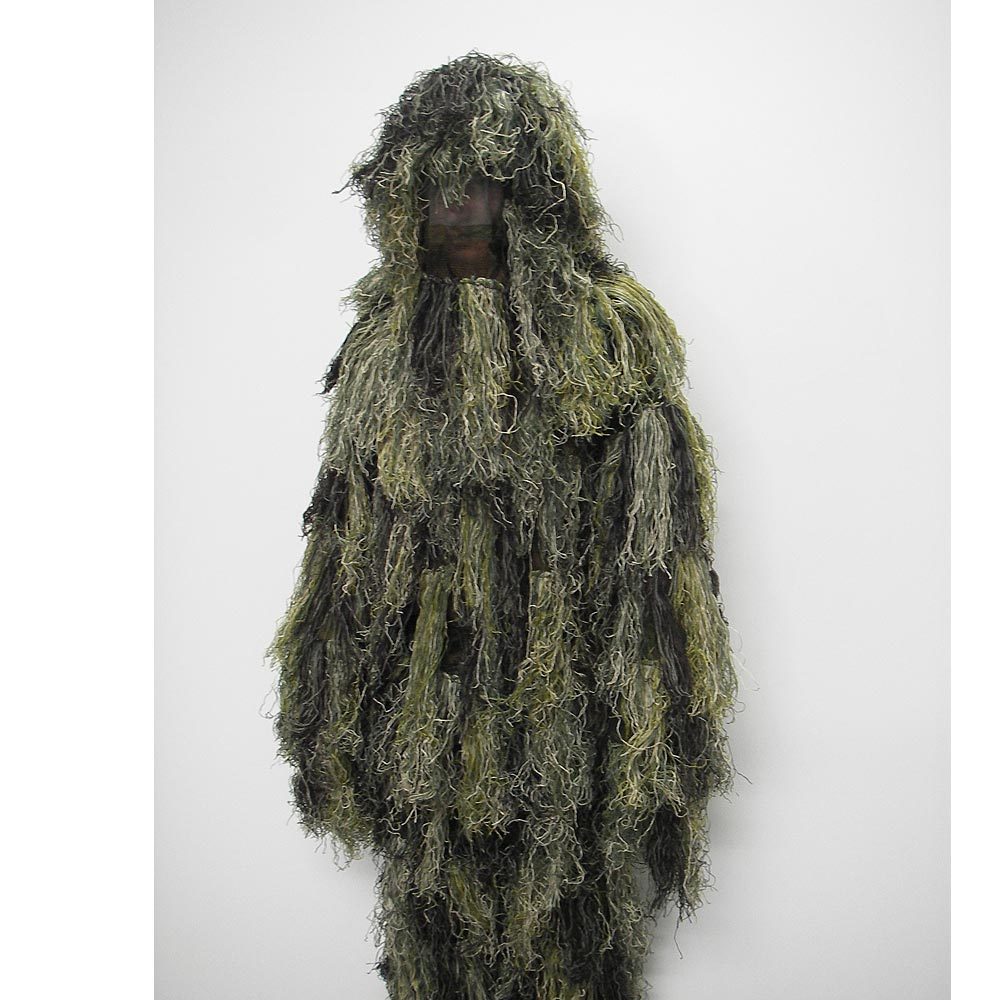 There are many advantages to wearing a ghillie camoflauge suit kit over a conventional flat colored uniform. One of the considerations to be made when wearing a Ghillie or Yowie suit are that it is always going to be hotter inside the suit than wearing a standard camouflage uniform. This is obviously the case as the material is thicker by its very nature and works somewhat like a fur coat. This concern is alleviated as much as possible by the design and construction of the suit. The inside lining is made of sweat mesh which allows air to flow through as much as possible. The strands and individual meaning they are not “clumps” of cloth than can more effectively retain body heat. These strands are similar to single strands of what we call in Australia “hessian” although other parts of the world including the US and the UK more commonly refer to this material as “burlap”.

Please note that although there are some fire resistant qualities to this material it is still highly flammable and should be kept some distance from open flames. Other considerations are that it is obviously heavier than just wearing a uniform (by about 1.5kg) and gathers weight as vegetation gets stuck to it. Retaining vegetation is an intentional characteristic as its optimal to have natural and realistic local vegetation working in conjunction with the suit but will add to its weight as it retains stick and twigs and leaves.

The third consideration is that fact hat the suit will make more noise than a standard uniform as it by its very nature displace more vegetation around the soldier when in the prone position or when in the standing position against vegetation in that mater. The suit is most effective when hiding in one place for longer periods of time rather than running. It is best suited therefore to stalking.

In the Australian Army there are quite a few regiments where possessing a Yowie suit is required. To my knowledge this very day there is not an issued Ghillie suit, this is intentional so that the soldier becomes capable of constructing his own which in turn, makes more effective camouflage.

Australia has the best outdoors for using a camo suit so we at Combat Australia have endevoured to get you the best possible ghillie suits. Sydney and surrounding areas have excellent woodlands and national parks for you to try out your new suit. Hiding in the bush and hunting is so much easier with a camo suit.  Kit yourself out with one of our top quality ghillie suits. Buy one by clicking the links above or have a look at the below youtube video for more detailed information on our Ghillie Suit's for sale.

For more information on our products please check out our YouTube Channel.